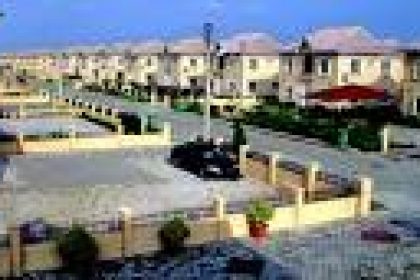 An estate in Lagos.

With over 170 million people, Nigeria, the most populous country in black Africa is plagued with housing problem.

This issue has been a thorn in the flesh of various governments as moves towards addressing the ugly phenomenon repeatedly failed.

To resolve the deficits, various governments through national development plans made frantic efforts in ensuring adequate mass housing, especially in urban areas. Like every administration before, the present Government’s effort is still fall short of meeting the nation’s housing expectations.

For instance, contrary to its promise in 2016 to build 5,000 housing units for workers in the public sector in the 36 states every year for the next three years, the government seem to have deviated from that direction as it announced last August, that it had commenced 2,736 new housing units in 33 states across the country.

In the same year, the government initiated Nigeria Housing Fund Programme (NHFP) under the Social Investment Fund of the Federal Government, in which N100 billion was set aside for its commencement. It is a scheme coordinated by the Central Bank of Nigeria to ensure access to housing finance by prospective homeowners.

The Federal Government has also earmarked N35.4 billion for housing in the 2018 budget for its workforce under the National Housing Programme.

It is pertinent to state that with the enormity of the nation’s housing problems, the 2018 budgetary allocation seems inadequate.

In view of this repulsive trend, the World Bank, in 2016, projected that it would cost the country about N59.5 trillion to address the housing deficits in the country.

About 108 million Nigerians are estimated to be homeless, based on an average family of six people per housing unit. The Bank projected that the country required about 700,000 housing units every year to curb this deficit.

With the prevailing situation, it is apparent that the real estate sector required aggressive private sector intervention.

One of the notable real estate companies to have made meaningful impact in the sector and also achieved giant stride in resolving the housing deficit in the country is Homework Development and Properties Limited.

The Lagos-based real estate company has not only shown its capacity to deliver affordable quality products, but has taken its success story outside the shores of the country.

The company also demonstrated that it could offer subscribers, within and outside the country, value for money through its affordable quality products, when it participated at the 2017 yearly conference of the Association of Nigerian Physicians in the Americas (ANPA) in Atlanta, Georgia, United States.

Through the event, the firm restored the trust foreign investors once had in Nigeria’s real estate sector and promoted the recent positive developments in the real estate industry.

ANPA members, who have benefited from the services of the company, specifically requested that Homework participate in the conference in order to expose the Nigerian success story to diaspora.

According to the Director of Homework Development and Properties Limited, Jide Adekola, an architect, the ANPA conference provided a platform to change the perception that foreign investors would not get value for money or might get scammed in Nigeria.

The event, he said, also created the awareness that there are professionals in the sector with the expertise to provide quality products in due time.

“The change in perception, which we have created, would in no small measure boost businesses and increase the volume of foreign direct investments that can engender increase in gross domestic product of the country, “Adekola said.

He added that Homework would also take part in the annual conference organised by the National Association of Nigerian Nurses in North America and other subdivisions within the United States.

It is also planning to hold similar exhibition and talks in Canada, the United Kingdom and other countries with large population of Nigerians

Homework had also ensured quality and affordability in its projects, which were showcased at the West Africa Property Investment (WAPI) summit last at Eko Hotel, Victoria Island, Lagos.

Responding to accolades from stakeholders and visitors to its stand at the summit, Adekola said the company’s projects were driven by passion to offer affordable quality homes to Nigerians.

“The company is driven by passion to create world class estates, which sets it apart in the industry. It delivers unmatched quality services to its clients through the provision of great architectural works in serene environments,” he said.

According to him, Homework intends to resolve the housing problem in the country through affordable mini estates of one, two and three-bedroom apartments with innovative architectural designs.

He said the company intended to deliver on the projects within a short period and that the affordable mini estates would be spread across the country. “There is a new demand for these apartments and there are people that need them for investment and related purposes since they are affordable.”

Also, a Director of Homework Development and Properties Limited, Chima Emerueh, said the company has made remarkable progress through its products located at Banana Island, where it has a small gated community of terraces and semi-detached duplexes.

He said the firm also plans to replicate its luxurious and quality products in other places like; Ajah, Yaba and other parts of the mainland.

Following the success recorded so far, Homework intends to explore opportunities in other West African countries with products within the reach of the people.

“Most people in Africa are looking for low cost houses and because we have done it in Lagos, we will do same in countries in the sub-region,” Emerueh assured.